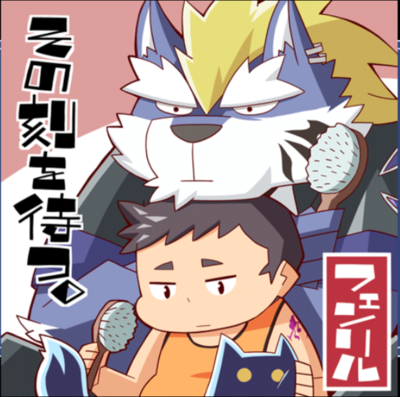 43 comments
[Show Comments]
All trademarks and copyrights on this page are owned by their respective parties. Images uploaded are the responsibility of the Poster. Comments are owned by the Poster.
The stories and information posted here are artistic works of fiction and falsehood. Only a fool would take anything posted here as fact.

odin was lucky to get vored by fenrir

which one? hes got 2. his permanent 4star is surprisingly one of the tamest illusts on this game tbh

Much like Tadatomo, Bottoms also self insert themselves as Fenrir. However, They get rightfully ignored.

Is it possible to get his keyboardist variant by normal summoning?

Why aren't we kink shaming this guy?

is that even a question

What colour is his pubes? Yellow? White?

wait nvm im having a stroke everyone is mcsexual

Just noticing this but his nether make sail keyboard has the name Ragnarøck like Ragnarok. Still waiting to hear if he and hati are related or of his relationship to the other Norse based housamo characters.

im so glad people are finding my youtube shitposts

I unironically want to fuck Fenrir's tight starfish shaped hole. I want him to feel all the pain as I force his sphincter to accommodate my massive meat log. His insides must feel like a divine silk woven from the limpid tears of a huge bara furry. I would fill him up with my seed and fuck him again and again. I would fuck the consciousness out of him. Nothing would remain in the hollow shell left of his body aside from his desire for his hole to be plugged by my dick. I wanna f him. Fenrir is my husband.

When I think about the rope bondage Fenrir hides beneath his coat a hard shiver goes down my spine. I want to rip the clothes off his sweaty furry body and ravage him. Nothing is off limits to me. I would lick the wax out of his ears. The stank from his belly button. The tears from his eyes. I would suck the stinky soul out of his butthole like a bong. If Fenrir were real, I would lock him in my basement next to my chinese ancestors bones and make him my own personal cock tube. If I ever got bored of his orifices I would cut new holes into his skin for me to fuck. My sin, my soul, Fenrir.

but then again dude, one of his long lost siblings could be garmr cause garmr is from norse myth and sometimes confused with fenrir.

Of those of Ya'll who are ignorant folks listen to this: Fenrir is based of Fenris Wolf/Fenrir of norse mythology(obviously 'cause the notes allude to that.) Fenrir(in norse myth) is a children of loki born by the giantess Angrboda. When the Aesir (or asgardians for ya'll marvel fans) found out about fenrir and his siblings (jormungundr and Hela) they wanted take caution on them. For a while Fenrir was allowed to co-exist with the aesir, But then he grew and grew to the size of a mountain. The aesir challenged fenrir to break chains that they bound him up in, hoping that those chains would be too strong for fenrir to break, binding him, But no luck. THIS IS THE PART THAT IS IMPORTANT TO THE FENRIR OF HOUSAMO: Then they made Sleipnir a ribbon that is impossible to break, and challenged fenrir to be tied up with it and have him try to break it, and fenrir agrees, but only if they release him if he can't break loose. Fenrir fails to break it, but the gods(like jerks) don't release him, and then Fenrir vows to eat up Odin and the sun and moon. Fenrir stays bound in sleipnir until Ragnarok. (there are some details involving a war god's arm I'm not that's not important here)

Fenrir's(housamo) Sacred Artifact is most likely a reference to Sleipnir, Because both Sleipnir and Sacred Artifact bind's Fenrir in a way,and both are fabric; Fenrir's desire of being bound up is a nod towards sleipnir as well (or for you, he just likes bondage.) Fenrir's(housamo) Distrust on everything is based on how the gods betrayed Fenrir(norse) by not honoring their word and helping him when he can't break loose. Fenrir's(housamo) Long lost siblings reflect on Fenrir's(norse) Siblings. (No space brother is Jormungundr and crazy sister is Hela)

Please tell me if i'm missing something.

He reminds me of a chuunibyou, except he actually has destructive, supernatural powers! I Love him!

I headcanon him as having the voice of Gundham Tanaka if Housamo were to be dubbed and nothing can stop me.

I pulled the new Fenrir and he wasnt in my familiars, and it took my stones

This thread always makes me laugh

Minivan is a furry

Consider yourself lucky. I got his stupid ass 4 times with NONE of the other 4*s making an appearance.

You also get Salomon-kun tickets as your 7th day login bonus, from event shops, or sometimes given as freebies.

I spent a Lil' Salomon Ticket (can't even remember how you get those things) trying to get this gacha's Fenrir. I didn't get him with it, sadly.

I did get Shino though, who I've always wanted, so lemonade I guess.

His second outfit has 2 forms.

leather club is 2 blocks down.

Ooh my hubbie got a awesome makeover. I still love him forever with or without the outfit. XD

So Fenrir is finally getting some love, huh?

About time! Only took them a year and a half.