Anonymous user
No. 15101
2 months ago
Score 0 You
these new skills evolution make him really great! i'm going to start using him

On top of being so hot, having the biggest bulge in the game, husband material and gameplay wise is easily a S tier? Yeah he might not get an alt ever but he doesn't seems to need one

Anonymous user
No. 15087
2 months ago
Score 0 You
I WISH I COULD GET MY ALT ACCOUNT BACK SO I CAN MAKE YOU STRONGER AAAAAAA

Plus a character quest on top of it. He's become one of the most valuable for stones five stars you can choose with the rainbow salomon ticket.

Not to mention he is now as good as BBQ cherno, he literally does EVERYTHING in one, and getting him means receiving 4 free stones from skill evos (assuming you didn't skill evo another avenger++ before)

Anonymous user
No. 15073
2 months ago
Score 0 You
Five star Ahab is now the one unit with the most skill evolutions, a whopping four total.

Oh wow they remembered he exists

we have ahab in our hearts

Do we really have Ahab though

Anonymous user
No. 13635
6 months ago
Score 0 You
if we have ahab why not get ishmael too

ACAB: All cops are bastards

AHAB: Towards thee I roll, thou all-destroying but unconquering whale; to the last I grapple with thee; from hell’s heart I stab at thee; for hate’s sake I spit my last breath at thee. Sink a-

Probably the most unfortunate character. His artist is gamma and his voice actor has passed away

Anonymous user
No. 9059
24 months ago
Score 0 You
Just got his 5 star variant im madly in love with him he is my big thick manly daddy now..❤

Anonymous user
No. 8812
25 months ago
Score 0 You
I love his manliness! If only I could find a boyfriend with the same body size and physique that would top me!!

Aw, really? That's a shame, because that would mean that the same goes for other characters they draw like Ophion, Makara and Garmr among others. Unless they decide to draw for Housamo again, but who knows if that will ever happen.

But isn't he going to return? Do you have so little love for your characters / fans as not to continue your stories? 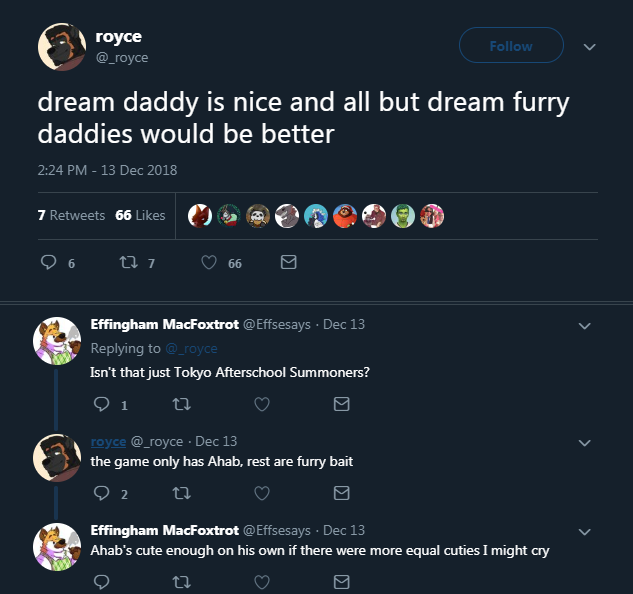 Not gonna happen unfortunately. His artist no longer draws characters for Housamo. This is because of global release and people releasing their doujins, translated.

You have no soul!

Anonymous user
No. 6273
32 months ago
Score 1 You
only call you captain cuz your dick is off the hook

Anonymous user
No. 6169
33 months ago
Score 0 You
Do you think his dick is as gigantic as Moby Dick

Oh, I should have take a closer look there, but thanks!

Anonymous user
No. 6000
33 months ago
Score 0 You
Hey guys, is there even any difference between rage and rage+? They seems to be the same

Anonymous user
No. 4638
35 months ago
Score 0 You
no ahab dont sacrifice urself ur cock is so fat haha

Anonymous user
No. 3106
40 months ago
Score 0 You
According to the English translation during the embark event, Ahab has a daughter. Someone should add that to his bio.

Anonymous user
No. 2503
44 months ago
Score 0 You
Ahab does really get me going, but... have you ever thought about his *ship?* I mean, just imagine the slick polished surface, clean enough to eat off of... which I would try, of course. Just thinking about the way the doors' hinges would squeak or how the boat's hull would creak in the open sea... why, it makes me feel as if I could rival the sea's waves with ones of my own. I want to boar that ship and do everything I can with the ship. Clean the decks, stare over the railings out to the waters beyond, sensually open and close the doors, make passionate love to the floorboards. Those aren't splinters, you see. They're symbols of the LOVE between the glorious ship and myself. Stick me on the end of the prow and slide me up to the base. My life is forfeit so long as I can spend the rest of it aboard that wonderful vessel. I want to lay on my side at night and stroke the walls, whispering sweet nothings to the ship that I *know* is listening. It may not have ears, but we can connect in other ways. We can love in other ways. To think of unfurling the sails alone... why, it sends such a chill down my spine...

Anonymous user
No. 2468
44 months ago
Score 0 You
That really was a nice post, anon. Unfortunately, I can’t be bothered to dignify it. Why, you may ask? Well, I must inform you that in the span of glancing at your post, I have ejaculated about five times to a rather enthralling mobage character called ‘Ahab’. The way the mobage depicts the gradual process of a grandpa becoming a cum dumpster really made me erect. Hell, I haven’t gotten that aroused since Shino’s death. Anyways, this beefcake gets raped by his drunk shipmate and has sex with all the guys on board. Now, these parts were perfectly fappable, but the real fun starts when she gets bullied and ostracised from his crew. His downward spiral of debauchery prostitution eventually leads to him becoming a mere shadow of a transient. In his last dying moments as a sex slave, he dreams of a future with his (would be) daughter. Instead of getting to live that future, he dies alone in a cold room. I swear that last scene will always bring me to ecstasy. Now, if you really want to get my attention, you must commit yourself to reading such refined works as I do. Only then can I consider you my intellectual equal.

Anonymous user
No. 1826
49 months ago
Score 0 You
his voice actor, Unshō Ishizuka, died back in August. He does die in his character quest (kindof) too but that's not what they're talking about :y

Anonymous user
No. 1822
49 months ago
Score 0 You
Why am I seeing r.i.p. In these comments? Main story spoiler?

Anonymous user
No. 740
53 months ago
Score 0 You
Holy crap I KNEW his voice sounded extremely familiar, I wasn't expecting him to have the same voice actor as Old Joseph Joestar. It's a small world after all ;_;

Anonymous user
No. 671
54 months ago
Score 0 You
Please rest in Peace

Captain Ahab, you will always be remembered. T_T

May you rest in peace.