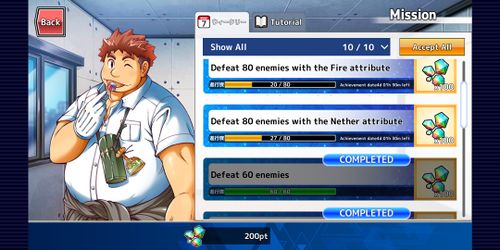 Weekly Missions were introduced during the 3rd anniversary alongside Andvari's Shop. They can be found in the missions tab (the green button in the top right corner of the screen).

On the mission screen you are presented with 10 different missions that have to be completed until the end of the week (03:59 Monday JST). Each mission rewards the player with 100 units of

Rainbow Shard upon completion. All rewards have to be claimed manually from the mission screen, players have an additional day to perform such action.

Weekly missions get reset each Monday at 04:00 JST.

At the start of each week the mission list gets reset with 10 of the missions from the list below.

Rainbow Shard a week. Below is a list of items you can exchange with the weekly mission reward currency in Andvari's Shop.

Out of all the missions listed above, the Defeat 80 enemies with the X attribute missions are usually the hardest to complete. Note that all of those missions can be completed by playing Challenge Quests or main Event Quests from the past events. If neither option is available, feel free to refer to a table below.

The table shows quests to complete two different attribute missions at the same time. If you only have one of such missions left, see quests on the main diagonal.

Table cells are colored according to the wards they are located in.

See this guide for details.

Anonymous user
No. 8712
13 months ago
Score 0 You
is anyone else getting the Loading screen glitch?