Date Quests (formerly known as Love Quests) are additional type of quests that, similarly to Character Quests, are designed to show a perspective of a character with little gameplay value beside additional

Transient Stones. They were introduced in October 2017 and were initially the only way to establish love and envy connections and were limited to the initial summoners. Starting with April 2020, making love is available to every obtainable character and only requires completing the 3rd Limit Break stage. Since then, the quests serve mostly as a bonus.

Most Date Quests have specific scenarios based on the character they love. For instance,

Unlocking Date Quests requires a character falling in love with someone else in your familiar list. This in turn requires owning any version of said character and completing their 3rd Limit Break stage.

Finishing a Love Quest with a character will grant them an Affinity Burst if they are next to their loved one in battle. This specific relation boost will provide the love-struck character with a flat amount of HP at the end of each turn.

If you wish to break up two characters, simply go to their status screen and tap the broken-heart icon. Doing this costs one

Forget-Me-Not. Accounts created before the addition were given four from the beginning, with more being obtainable from Andvari's Shop in exchange for

Rainbow Shard, as well as occasionally being purchasable from certain event shops. 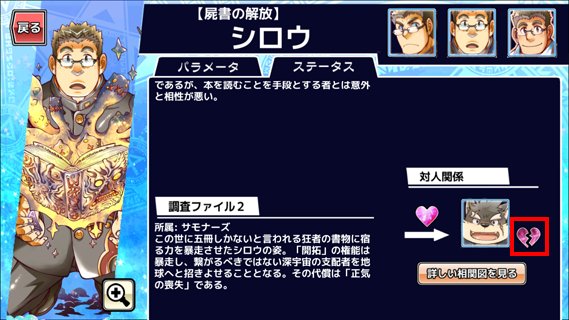 If Moritaka loves Andvari (based), his Date Quest will be altered to mention the latter.

Can I ask, what is with Transients with special lines part? I checked Moritaka's and it has Shino and Andvari in it

How does that work or trigger?

Anonymous user
No. 12872
8 months ago
Score 0 You
Someone has made a rough translation of Tezcatlipoca's date quest and dropped it on his page a while ago. They left a disclaimer saying its a rough translation and still being worked on, but so far it looks legit to me. I'll just link it here in case anyone else wants to bat their eye on it. https://tinyurl.com/2p93vnmb

Upon further investigation, this appears to be caused by a bug, rather than being an intended branch implementation like Gunzo. Confer the following screenshots: https://imgur.com/a/uAInBWr

Note how, with the exception of the character's name (which is dynamically changed), the line remains the same. Characters with a separator dot between their names have their sprite shown, irrespective of any ties (or lack thereof) to Wakan Tanka.

Anonymous user
No. 12720
9 months ago
Score 0 You
I thought Zao had a date quest somewhere?

Anonymous user
No. 9868
21 months ago
Score 1 You
Ughhh when are we gonna get official English translations for these already

Anonymous user
No. 9630
21 months ago
Score 1 You
Anyone know where I could find the Japanese transcripts for the date quests?

I guess translating a Date quest would be harder than a Character or Special ones since not only one will have to translate the main dialogue and the different choices, but also the special lines said character has for the other specific characters. If someone is still willing to translate them, it would be best to start with Ophion's since it doesn't look like it has any special lines.

Anonymous user
No. 8834
25 months ago
Score 0 You
Ah I wish somewhere had translations

Anonymous user
No. 8602
25 months ago
Score 0 You
My dumbass thought they meant date as in month-day-year

Anonymous user
No. 8575
25 months ago
Score 0 You
I guess no blog ever translated these huh

Anonymous user
No. 8527
25 months ago
Score 0 You
If only I knew how to translate these love quests. I would really love to contribute to this website as much as I could.

Will date quest be translated?

Anonymous user
No. 7726
28 months ago
Score 0 You
imagine having enough resources to actually make a whole new game and hire a new team for it while still struggling to pump out chinese/english translations for your other game

Anonymous user
No. 7723
28 months ago
Score 0 You
I'm suprised Ophion's quest has no special lines. I though it would have them for Protagonist and Aizen at least, maybe for Lucifuge too.

Anonymous user
No. 6480
32 months ago
Score 0 You
Will date quest be translated?

Yes you can, it appears back in the shinjuku ward