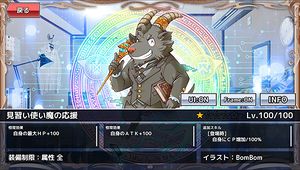 Most of the AR Equipment listed below can be acquired via AR gachas. They work similarly to the usual transient summons except that you cannot use regular

Lil' Salomon Tickets. Instead, you can spend

Obtaining dupes of AR Equipment will increase their max level based on their rarity the same way normal units do: each duplicate of

AR equipment will increase the max lv by 1, each dupe of

equipment will increase by 5 and

Limited AR Summons have increased rates for certain AR Equipment. Note that none of the gacha ARs revealed so far have been limited and therefore they would all later be available in Regular AR Summon. New event AR Equipment may take a while to appear in the regular summon, so make sure to check the distribution page to see whether the equipment you desire is available before spending your resources.

Some AR Equipment could only be acquired during certain limited events in according event shops and free quests. Some of it may appear later in Andvari's Shop, where players that missed those events can purchase copies of them with

Anonymous user
No. 15294
one month ago
Score 0 You
how to increase % effects in AR equipments?

Anonymous user
No. 3043
40 months ago
Score 0 You
This game mechanic reminds me of the memoria cards from magia record where you put cards to boost your characters.

Anonymous user
No. 3035
40 months ago
Score 0 You
I think they're really cool I just think making the summon for one cost the same as a new unit is very excessive. Maybe 1 or 2 transient stones or maybe use the ally summon points but 5 transient stones?

>>3031 aaaaaaaaaaaaaaaaaabsolutely not worth it. the rates are garbage and you need to get the same card multiple times for it to be of any use.

Anonymous user
No. 3031
40 months ago
Score 0 You
Worth rolling for AR? I’m leaning more towards saving for my fav unit

Anonymous user
No. 3022
40 months ago
Score 0 You
Sounds like a pretty cool concept, LW should make more of that equipment. It would be pretty hard to make quests for each one, so they should make a gacha for it or something. As for the cost, maybe make it cost as much as regular units because fuck you and no, we're not giving you more stones.