Tokyo Afterschool Summoners uses a turn-based strategy battle system. All information concerning its general mechanics can be found on this page. 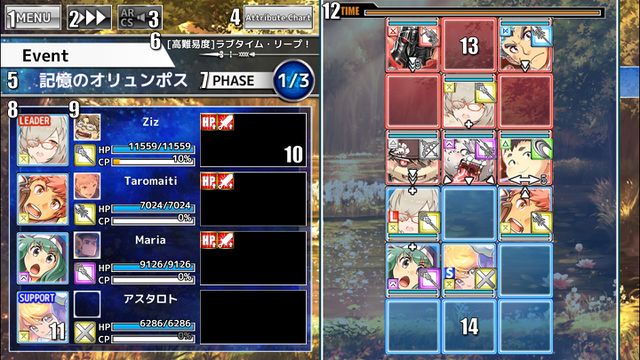 A screenshot of the game's battle system.

Battles in Tokyo Afterschool Summoners pit the player against a host of CPU-controlled enemy units. The player and enemy alternate turns, starting with the player. Each turn they can move one unit, after which all their units will automatically attack any opposing units within range. This continues until all units on one side are defeated.

Each turn consists of two parts: movement and attack.

Once both parts have been completed, the turn ends, and the enemy begins their turn.

During movement, it is possible to move multiple units at once. Simply move a unit into a space that another unit occupies, and the two will trade places. By keeping a unit in a central position, it is possible to move many units at once into strategic positions. It is also possible, although difficult, to move a unit two cells away without swapping with another unit, and to a diagonally-adjacent cell; for example, moving to the north-east without "touching" the north or east space.

Units with smaller ranges can have trouble hitting enemies in back rows. However, the Danger Area's size varies with the placement of enemies. Therefore, if the player takes out all the enemies in the front row, it will fall under the player's control and be incorporated under the Safe Area. This area can however can be lost if enemies occupy it at the start of player's next turn. Use this to your advantage if you plan on using a lot of

Slash users. Note that enemies can take advantage of this too, so if the player opts to run and heal, enemies will start to occupy the Safe Area.

As a follow-up to the above, if you're fighting on a wide battle field with a lot of

Slash enemies, clear out all the enemies on one side, then stick a unit to maintain your safe area, while

Shot units pick off all the other units on the other side of the field safely from rows further back. The enemy will have to go across the entire field to damage anything, which is valuable time you can spend killing them for free instead.

Each time one of your units attacks or gets attacked, its CP raises a little bit. Once it reaches 100%, the following turn that unit will use their Charge Skill instead of their regular attack. Note that there is no way to stop units from using their Charge Skill if their CP reaches 100%, so if you want to save it for a later turn, you need to move it to a position where it attacks no enemies. Charge attacks can also have a different range than normal attacks, such as 3* Cusith's Charge Skill having

Magic range, even though his weapon type is

Blow. CP can also be gained from certain status buffs.

Currently, the game has two stats: HP and ATK. Every unit has their own base stats and a growth curve unique to each stat. For more information regarding these stats, including how damage is calculated, please see the corresponding pages.

Seeds are geared towards increasing stats of all variants of a unit.

A single Seed will increase its correlated stat by one, while the double Seed raises a stat by three, yet the triple Seed increases by ten.

HP Seed and ATK Seed seeds do not require any special conditions for the unit, while Level Seed requires the unit to be at absolute max level (implies max Limit Break), and Skill Seed requires Skill Level 100.

Currently, the limit to how much HP and ATK can be raised by Seeds is 1000 points each, while Level Seed and Skill Seed can only increase their correlated stat by 15 and 10, respectively.

Units have an additional level parameter: Sacred Artifact level, which determines the strength of a unit's charge attack. This value is increased by acquiring duplicate units. Typically, duplicate

s increase this level by 20,

s increase by 5, and the remaining lower rarities merely increases by 1.

Relationships between units (Like, Dislike, Love, etc.) can play a role in how you'll clear a quest; moving a unit adjacent to another with a relationship (love/like/dislike/rival) to or from said moved unit will grant buffs to the source of the relationship. Each buff will last for 3 turns.

Starting from the 2017 Christmas Event, during special Event Quests, the Boost Function is a supplementary system aimed to provide party-wide buffs that typically last the entire battle.

With both the 2017 Christmas Event and 2018 Summer Festival Event, you can obtain special consumable items from item drops or the event item exchange shop.

With the 2018 Valentine's Event, the Boost Function was used via relationships between two units. Similar to this, the Distant Gendarme Event, non-consumed strategies (formations) provided boosts in a manner similar to relationships, but required units to be positioned a certain way.

Each unit wields a certain weapon type and element, which acts as a multiplier on their base damage. Furthermore, each weapon type attacks in a different range. The weapon types, damage multipliers, and ranges are listed below:

To prevent confusion with how the energies work, it's best to work off of the above groups: 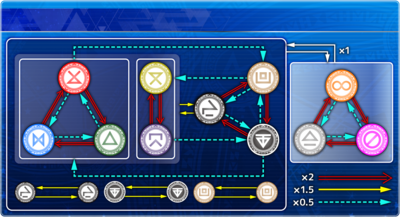 We need to update this to include the new elements such as Infinite.

Anonymous user
No. 11491
15 months ago
Score 0 You
Infernal is a glass cannon. It does 1.5 damage to nearly everything, but takes 1.5 from those same things.

They are available in the event shop for NEW seasonal events, rerun events like the one happening right now or just permanent unit campaigns don't have them.

Anonymous user
No. 4771
34 months ago
Score 0 You
She possess a cute voice and it's adorable

Housamo pvp is telling someone their husbando is shit

Anonymous user
No. 3709
37 months ago
Score 0 You
It's like pokemon the infernals are the legendary type, too rare and too OP

The protagonist, meanwhile, is always All-element. On both the 3* and 4*.

One question, can I change an element on a specific unit?

For example, my main character's element is water and I want to change it to fire... Can I do that?

Anonymous user
No. 2461
44 months ago
Score 0 You
Why can’t I get any drops from events? Do I have to fully conplete them in order achieve them?