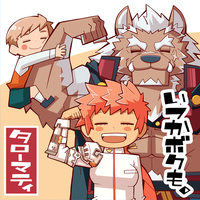 25 comments
[Show Comments]
All trademarks and copyrights on this page are owned by their respective parties. Images uploaded are the responsibility of the Poster. Comments are owned by the Poster.
The stories and information posted here are artistic works of fiction and falsehood. Only a fool would take anything posted here as fact.

all of the above!

anon what the fuck is wrong with you

Which is more soul crushing? Doing three multi-rolls and get nothing but shitty units or Marchosias not replying to Tadatomo's thirsty dms?

i dunno what people are so mad about. Marchosias is pretty darn good for an old unit, especially his 3☆ version

If we ever get a skin for him without the kid in it, Marchosias would have an explosion of popularity.

And just think, he might even get an event variant that actually has skills that matter instead of three useless shitty fillers. Tough Winged Griffon's super fucking good but it can't make up for Tailed Demon and the fact that he has no way to keep himself alive. Make him valiant slash, give him a taunt+defensive buff on phase start and he'll make Setsubun Oniwaka jealous.

Make you a daddy again

How come he's not liked/hated by the others and that he doesn't like/hate anybody?

He's not appreciated enough. I think it's time for a variant.

What’s his Sacred Artifact? I don’t see it being mentioned anywhere in the game.

The child's name is still Susan.

No but at least we now know why it's there

So what are those orbs flying around him in his 4* art?

So we still don't know the child's name, right?

Reminds me of a certain character from Grimoire of Zero

He looks so strong and handsome, but I think he really need to buff in game!

This man has permission to make my asshole bloody