Event Quests are Time-Limited Quests to commemorate an event, be it about a game update, such as mechanic changes or updates (Campaigns), or an in-game event, such as Valentine's or Christmas.

Large events, such as Valentine's or Christmas, have a long spanning event accompanied by a gacha with units relevant to such event, story-driven series of Main Quests, Free Quests focused on the event-specific drop items, and an event shop to exchange event-specific drop items. Specific event-relevant skills (that can stack, and only require a unit with that skill unlocked in the party), can help with the item quantity dropped. Typically with LW's release schedule, an event will release four tiers of quests which focuses on using specific skills and dropping one item, then one by one they'll release another tier for both items, while the Main Quest typically releases a new pair every other day, typically. It is suggested to wait until all Free Quests are released to farm for items, as the item quantity and drop rates per quest tier increases along with difficulty. After the Free Quests expire, the Main Quest and event exchange shop has a week left, to finish up with the story and let players redeem from the event shop, and after that, bonus quests of short dialogue exchange. It's common practice, this year, for LifeWonders to release "sequels" to past big events of last year while re-releasing last year's bonus quests, and a gacha as a second chance to obtain limited variant units. During these Event periods, it is highly recommended to burn your stamina in the Event Quests, as they offer higher rank XP, and item acquisition per stamina is far fairer.

Non-Event Time-Limited Quests, however, don't follow a regular pattern, like regular large Event Quests. These quests are usually campaigns to commemorate recent game updates and additions, or shorter events, such as New Years and Golden Week.

Below is a list of pertinent, relevant on-going events and their details, while at the bottom is a link for past-events, for posterity sake.

Last year's Valentine's event is reprinting! It will feature the AR and transient banner that ran last year alongside a new AR banner with new ARs:

A Fight of Fists and Evil Eyes,

A Present from an Uncouth Fellow and

Let's Check Out that Booth!. All the ARs and units part of these banners will provide a bonus to the event free quests listed below:

Last year's login bonus will be rerunning again. Each day, a member of the summoner will hand you a special chocolate. These chocolates are purely cosmetic and can be obtained from Item in the settings. They feature a flavour text from each of the respective member too. 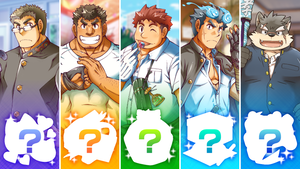 "Happy Valentine's! I decided to try making chocolates with the D-Evils this year, and I made a lot, so I'd like you to have some. Of course, yours are extra special."

It's a Valentine's present from Shiro and the D-Evils, with each chocolate in the shape of a different D-Evil's face, and the whole set presented in a multitude of colors. Casually mixed in with all the D-Evil chocolates, there are also several heart-shaped chocolates for good measure.

"Heya, partner! Good time of year for some chocolate, and there was a specific kind that caught my eye, so I got some for ya. Give 'em a try, and next time you see me, tell me in private what you thought of 'em, okay?"

In a rather un-Kengo-like move, he's given you some expensive, high-end chocolates, but is pretending like it's no big deal. Unwrapping them and looking closely, you find bite-sized bonbons filled with chocolate liqueur that's undoubtedly heaven to taste!

"Happy Valentine's! I had Choji help me make these. I wanted to give you something as a thank-you for always helping me out."

It's a Valentine's Day present from Ryota! And although the flavors can be largely attributed to Choji, the feelings behind the gift are all Ryota's, with his heart shining through in every bite.

"Since it is the holiday you call Valentine's, I searched for an appropriate gift to give you, but the truth is that I am a bit out of my depth. I hope that what I got for you is not in any way strange and that you will accept it without criticism either way."

Toji's present to you consists of sweet rice paste confections filled with chocolate. Though nonstandard, they look delicious! You can't help but notice the creases and crinkles in the wrapping, too, suggesting that Toji must have put considerable effort into the gift's presentation.

"Guild Master, allow me to wish you a Happy Valentine's Day. I am unaccustomed to this tradition of yours, but I do hope it is not out of line for me to offer you this humble token of my feelings."

Moritaka's gift to you consists of a single large bone-shaped chocolate with a chewy consistency in keeping with its appearance. Even for non-Canis Therians, however, the texture and flavor are extremely addictive, suggesting that you'll be gnawing at this gift for quite some time to come and enjoying every moment of it! 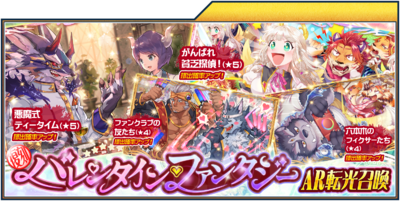 On the main map, an area called "Past-Events" will appear, offering quests of events passed for no-stamina cost, but without the rewards. This is mainly for players who originally missed out on these event quests, as pre/post-quest story can always be viewed under Recorded Memories. Naturally, current-running events can't be accessed from the Past-Events area. However, any future events may impose a cost (Transient Stone or

To avoid clutter of this page, past Event Quests have been moved here.