In Tokyo Afterschool Summoners, quests are the primary way in which players can engage with the Battle System in order to obtain experience points to raise unit levels and player Ranks, as well as obtain item drops and first completion rewards.

Most quests require a set amount of stamina points before they can be played. In these cases, stamina will be consumed whether the player wins or loses the subsequent battle. Certain types of Story Quests consume no stamina, namely those labeled as "No Battle" in red, High Difficulty Quests, and quests in the Past Events area. 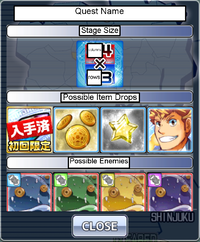 Before starting a quest, the player may view its associated information by long-pressing it during quest selection:

Most quests will award the player one

Transient Stone upon successful completion, even when they cost no stamina. There are some notable exceptions to this rule, however. For example, quests in the Past Events area give no rewards for completion, and High Difficulty Quests will yield different first completion rewards, such as one

Lil' Salomon Ticket, or a large amount of

These quests can be repeated indefinitely, so long as the player has the required stamina to start them.

These quests always provide experience points and item rewards upon completion, although the drop rates for specific items may not be guaranteed. Some Free Quests are always available, while others may only be completed during their assocaited event period.

These quests may be completed for no stamina cost for their full duration; however, these only award the one-time First Completion Rewards, provide no experience points, and are available for a limited time.

These quests yield First Completion Rewards, experience points, and general item rewards, but can only be completed once.

These are the primary way of experiencing the game's story. If there is an associated battle, they will cost stamina points, but otherwise be free of cost when there is no battle. In the latter case, the quest will provide First Completion rewards, but no other items or experience. The associated story may be replayed at any time in the Memories menu.

Event Quests are available for a limited time. They can be classified as Main Quests, Free Quests, or High Difficulty Quests.