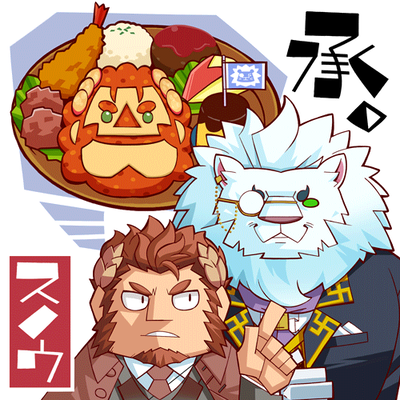 49 comments
[Show Comments]
All trademarks and copyrights on this page are owned by their respective parties. Images uploaded are the responsibility of the Poster. Comments are owned by the Poster.
The stories and information posted here are artistic works of fiction and falsehood. Only a fool would take anything posted here as fact.

is he gay or european?

Give me that Garmr doll

you are my king

Claude is copycat, now copying tezcatlipoca's LB3 but in a move instead of after 4 turns

Poor guy only has Snow and Garmr left in his guild, and maybe Taurus and Nomad as well

I see claude01c Have a happy faces but in the icon, I see his face looked happy and have a frowned eyebrows??

okay. i know it's obviously not can(it's a fanfic for pete's sake),but in that fanfic he's secretly related to my OC named Casey Buhelment to the shoke of literally everybody who discovered it.It takes a long time for Claude to process everything, but in the end he's happy to know he has more relatives than he thought he knew.He's even willing to invite them over to the colleseum.you'll be able to find this story in Amino,the Housamo community specifically.my profile in Amino is named Casey the Creative

Ah makes sense... I was a little confused because, iirc, main story ch,7 mentions that Snow has been in his service for many decades but I didn't consider that he would not necessarily need to be a student

In his character quest, which is translated on this very wiki. Also, it's been stated repeatedly in canon that in order to use the in-universe App to use magic powers and junk, you need to be somehow involved in a school, either as a member of the faculty or as a student, regardless of actual age, which is why there are characters who are literally eons old enrolled as students, like Chernobog (although his is a slightly different case because, regardless of the App, Transients are legally required to be a part of a school so that they can be monitored, as well as providing them a way to learn about the world they have been summoned to).

Wait, where does it say that Claude is in high school?

WE. THE. PLAYERS are the one who has no rights !

Claude has no rights.

how many people has he married and when will it be my turn?

Now I'm confused, is he a Husbando or a Waifu?

i wonder what he says in his summon line

fixed that for you

To everyone else, because he's a slut.

Am i missing something? Who is he married to?

Forget the plushies being on the dakimakuras

Now shut up and take my money

Uh... you do know what kind of game this is, right?

And the character's personality?

Ruined? What are you talking about? He is rocking out that Tuxedo+Veil+Wedding Dress hybrid. He is fabulous

Why ruining such a beautiful man with a wedding dress...

Claude has a wedding skin, the gays have won.

I CAN FINALLY MARRY CLAUDE!

Thinking about it, they can make a lot of money by selling official Plushies!

His voice makes me wet

It would seem an error has been made, why is Ded's 4star variant under claude's page ?

Come on Lifewonders make that Garmr plushie an actual thing we can buy. ♥♥♥♥♥

The plushies being members of his guild is absolutely the most wholesome and cutest thing ever! Man Claude is great!

He's basically the love child of Nero and Iskandar

There are only three things of which I'm proud of being Italian: food, art, and having same Claude origins

He's always seemed just ok for me, and not so special. But it's been some days since my kokoro goes doki doki when I look at him.

best boi is on fire