Platinum Lil' Salomon Ticket will be returning again and as per anniversary tradiiton, there will now be five tickets to celebrate the fifth anniversary. With it, you can redeem it for

unit or AR Equipment, or "valuable items". Tickets will expire after the event period ends, so be sure to use them.

Additionally, a special Voice Quest (『５周年記念の祝宴』) will be made available. On completion of the quest, the player will be awarded five

It's Crafting Time!. Last year's Anniversary Event Quests will be reprinted for this event period. The

Platinum Lil' Salomon Ticket rewarded last year for completion will not be awarded this time around. 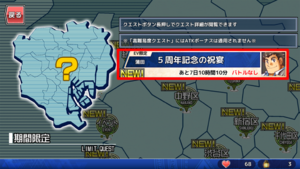 Don't forget to play the event quest to receive your platinum tickets!

During the campaign, stamina costs are reduced to 1/2 for main quests and 1/4 for free quests! The rates of great & super success will also be increased.

Yaksha of all the previously released elements to the Regular and Premium Ally Summons.

All of 2021's limited gacha banners except for Halloween Police event's will also receive a special reprint during the event period.

Lastly, LW will issue a message regarding their plans for Housamo's 6th year.

Rainbow Lil' Salomon Ticket. The player may go to the shop tab to enter its shop, which is shared with the 3* ticket. Players may redeem that ticket for a permanent 5☆ unit of choice. 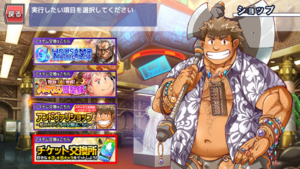 The location of the shop

By logging in at least once during the full Anniversary period, players will instantly receive

Transient Stone x150 and a commemorative guild item. In addition to that, players will receive extra daily rewards every day, the items and schedules listed in the table below.

In celebration of Housamo's 5th Anniversary, the prologue of Main Quest Chapter 13 campaign will be delivered during the anniversary period. With it comes 2 new units:

Wakan Tanka∞ along with 2 returning units:

Temujin. There is also a stamina campaign running as per the anniversary celebrations! Due to only the prologue being released, Chapter 12 which was released earlier in July will not be receiving TW, CN and EN localisations as of writing. The following banners are available during the campaign period: 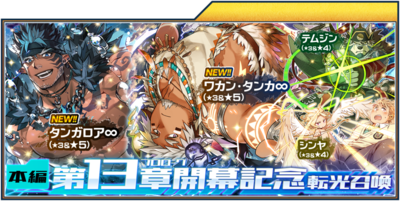