There will be a new spring campaign this year set just before New Semester begins! During the period, there will be a banner featuring the variants of the Berserkers and a half-stamina campaign for Daily Quests. The coin dungeon will also be open during the campaign, albeit for 2 weeks only. Alongside that, the announced translations for the three dungeons (Yog-sothoth in Shinjuku, Thor in Ikebukuro and Fisher King in Aoyama) have been released. Login once during the campaign to receive

その日は、桜の山で. The missions are as follows:

\*Multiple instances of the required weapon are all counted Eg: Bringing 2 Thrust characters counts as having it cleared 2 times.

There will also be a new AR in the Andvari Shop coming on April 1st: 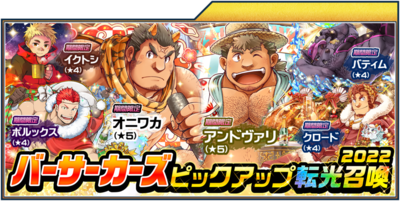