The announced 2nd event of Summer comes on the 28th of September! It will feature

Daikoku along with 2 new characters

Zhurong in an onsen style event! Tanetomo and Elli have received skins and are featured as boost units for the free quests too. There will also be a farmable AR

Welcome to Hot Spring Village of Hell. You can login during the event period to receive new guild items! The free quests are available at the start and the high difficulty quests will be added sequentially mid-event. As with new events, the main story or special quests will not be available in CN, TW or EN languages yet.

Horkeu Kamui's voice actor will also be changing in time for his new variant as his previous voice actor, who was also the prior VA for

Shiro before they received new ones during their first event variant debut and a few months prior to the release of AR Equipment, respectively. His new VA is Masahiro Ogata.

The item bonus are as follows: 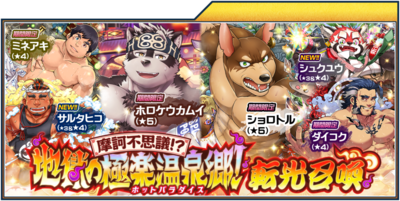 Anonymous user
No. 11498
3 months ago
Score 0 You
Will this event get re-release in the future? I can't get 5star Kamui "Dizzyingly Hot" and I'm planning to save for him next year...

The event shouldn't re-run for another two years or so BUT banners are reprint several times in the interim. The next time should be during Anniversary (December), when they give us a bunch of free stones too. Failing that, probably next year when they reprint all summer banners.

First try the option in the game to clear downloaded data.

I've seen someone comment that on Reddit but not sure if it was you. You can try copying your Authkey to an Android virtual machine if you have a computer. See if the store works there. If not LW will need to help you. If so make 100% sure you backed the Authkey up, uninstall, reinstall, and restore the authkey.

What ended up working for me was changing my device's time zone to Tokyo, Japan.

Anonymous user
No. 11436
3 months ago
Score 0 You
I cannot access the event shops since the update. Is anyone else having the same issue?