Following on their reprinting of other Event Shop units in a whole new event (Yule and Sitri), LifeWonders will hold a new event to allow players to get Zao.
For this event: 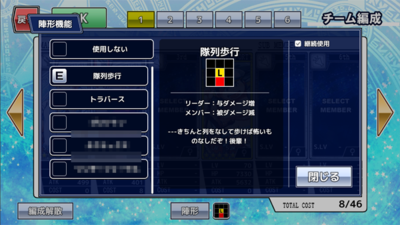 Like the boost function for Christmas 2017, you select from a list of formations before battle. To activate them, you simply arrange your units in the order given; however, the Leader must be in the Leader spot. To make up for this, the buffs apply for the rest of the phase, leaving you free to move your units and apply more buffs to other units.

Note, you can set a default formation by ticking the checkbox on the right.

Below is a list of formations, what they do, how to do them, and a slight note. These are unavailable beginning this event, as they are unlocked by clearing future Event Main Quests.

Small, costless VN-focused quests focusing around event-relevant make a return; these scenarios each focus on: As an additional reminder, to unlock these scenarios, you must have the character in question.

Translations for these will be added when they get added.

These quests are one-time only, so their event shop item ratios aren't important to calculate.

These quests can be repeated as much as you want. Each quests has a Rank XP to Stamina ratio (as always with quests) and their main event-item drop per stamina ratio (maxima do not factor in skill multipliers).

Again, it's heavily advised to wait for all the Free Quests to release before any intense

These quests focus on yielding Energy Ball more, so units with Athlete, Mountain Conquerer (+10%), Rise to Full Height, Wielder of Adamantite (+20%) are preferred.

Anonymous user
No. 202
50 months ago
Score 0 You
It seems that the scenario is as poor as a valentine event in this year. But in some Japanese housamo community like wikiwiki, most of all negative opinions about not just this event but others like character skills or game systems are ignored or suppressed. They just look on the bright side and praise the Dev Team whatever they do. A new cult is here. This is what I feared. I hope this community is okay...

I heavily recommend to noy buy the alpine and siege formations from the shop, the Wandervogel one should be the most useful one for completing this even'ts challenge quests

If your team really needs the defense buffs you can consider getting Siege, Alpine on the other hand may seem very good but is very hard to pull off and will likely make you loose one or more turns if used in free quests ( The formation set up heavily requires ?x6 boards )

Anonymous user
No. 188
50 months ago
Score 0 You
It can be inferred in the taglines of formations that Zao is the speaker, due to the plentiful use of 後輩.

Anonymous user
No. 176
50 months ago
Score 0 You
It seems that the Mountain Jelly dosen't drops from what is said on the top, instead the drop is randomized.

Anonymous user
No. 185
50 months ago
Score 0 You
No drop is guaranteed, but all the drops documented are possible drops

Anonymous user
No. 165
50 months ago
Score 0 You
Currently documented drops are not 100% correct, some are still missing, or may be incorrectly positioned (mainly boost items).