Lifewonders is launching their first autumn event of the year, starting early October. As the event is released, the associated Transient Summons will be added, these include

Tezcatlipoca (Festival). Furthermore, the cards for all elements of

Nether Wrestler will be obtainable through Free Quests.

Some existing characters will also get new skins fitting the festival theme of the event, these include

In this event, all characters that have existing (or will receive) festive skins will give a 10% bonus on the tokens obtained through free quests, these being

Festival Ticket. In addition to this, every piece of existing AR Equipment will grant an additional 20% bonus.

The banner unit rate-ups are as followed:

The full list of festive skin units that give 10% bonus on both currencies are as follows:

With the new update, players will be able to set AR Equipment as Favorites as well as filter event bonus units across friends list more effeciently. Furthermore, battles will start displaying the turn numbers.

Below is a list of Special Quests for this event and their translations: 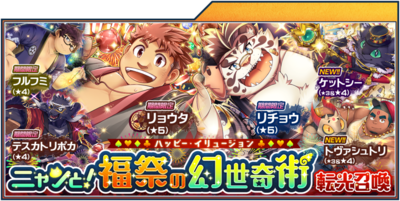 On October 19th an event extension was announced and with it the shop got restocked with a few extra items.

Until now an Event only gets a translation on a Rerun

Anonymous user
No. 7923
27 months ago
Score 0 You
does anyone know if they plan on a translation?