Sacred Artifact Level, also referred as Sacred Artifact Lv, S.A.Lv, SALV, SALv, and historically referred to as jingi among fans, is a card property that determines a damage multiplier applied in the card's Charge Attack.

A card's SALv will increase if a duplicate of that card is obtained. Cards (and thus duplicates of cards) are typically obtained through Transient Summons; however, certain cards may be obtained as quest completion rewards, exchangeable goods in Item Exchanges, or through increasing Guild Rank in the case of the

Protagonist. The maximum SALv a card may have is 100; however, a card may reach an effective limit before this due to limited availability of duplicates, such as with the Protagonist limited by the maximum Guild Rank, and Lantern acquisition during I Ain't Scared a No Halloween! (2018 Re-Release).

The card's rarity determines how much the SALv goes up when obtaining a duplicate. This is tabulated below:

If a card would exceed SALv100 with a duplicate (such as if a ☆5 at SALv81 obtained a duplicate), then card instead caps exactly at SALv100. 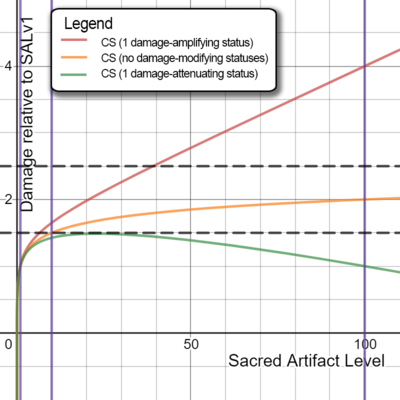 The SALv acts as the effective Skill Level for the Charge Skill. It directly corresponds to the level of any statuses it bestows or inflicts. For example, a charge skill of SALv41 bestowing Blessing will bestow a Lv41 Blessing status. It also linearly corresponds to any HP- or CP-depleting and restoring/increasing effects. If the points (HP or CP) added/subtracted at SALv100 is represented as PointsSALV100, then the calculation for the exact value of the effect at a given SALv is listed below:

If a CS grants any attack buff (except for Nourishment) the damage scaling changes. At SALv100 the damage is 4 times higher than SALv1.