The Tokyo Santa School or simply Santa School is a high school located in the Shinjuku Ward of Tokyo. It was originally proposed by the Headmaster

Ded Moroz. The motivation for its creation was to help maintain the delivery of presents and fulfill the legend of Santa Claus, particularly since Ded's back problems were becoming an issue. 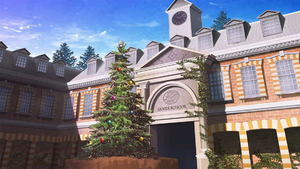 The Santa School acts as a normal school outside the holiday season. Classes and summer camps exist to sharpen Santa skills.

Different worlds hold different mythologies of entities who deliver gifts, and some flexibility exists for Light Santas to perform in that regard. However, adherence to some traditional aspects are stricter, to match the mythological figure of a jolly red-suited figure that children expect.

The Dark Santa course (primarily known as the Charcoal course) teaches Dark Santas to punish naughty children to encourage them to reflect on their decisions. Enrolment for the course is low, but was necessitated nonetheless by Ded's back problems impeding his own Dark Santa duties. Students are typically scouted. Although it is not advertised, it is placed in equal standing to other departments in school pamphlets.

Different worlds hold different mythologies of entities who dole out punishment, and as flexibility for the methods and appearances between Dark Santas is expected.

Part of a Reindeer's job is being able to determine which homes have children, and thus they tend to be good at discerning the scent of children.

The Santa School is located near Shinjuku Academy (about a 20 minute walk away), to which it has close ties. It constitutes a main building, student dormitories, and a hall used for dances and parties. The main building has classrooms and an auditorium. Dorm rooms are quite large, and so usually accommodate two people each. The hall is large enough to hold a wrestling tournament, and also has a skylight.