X-mark icon representing the None weapon. 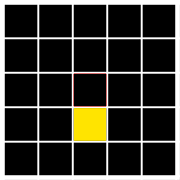 Yellow indicates the square the ally None card occupies. The red outline around the square is symbolic, indicating that no squares are checked for enemy occupation to attack. This means that the attacking ally card will miss every turn. The exception to this is when the ally card has their attack disabled (e.g. through

None (kanji 無) weapon type is also referred to as Nothing in in-game files. None cards do not apply damage through attacking, as they do not have a weapon range at which to attack at all. This weapon does have a weapon penalty multiplier (0.0), despite this value being irrelevant without any weapon range. Unlike other cards, None cards do not gain any CP when struck. They also have a defined CP gain of 0 for every instance they hit a card (which should never happen). None licences are obtainable in Daily Quests on Wednesdays JST and in certain free quests. None souls are currently unavailable in Daily Quests.

Cards which have built up less than 100 CP and are not affected by Weapon Change attack with a default weapon type. Skill leveling and limit breaking a card requires souls and licences that match this normal weapon type. A full list of cards with None for their normal weapon type can be found here.

When a card is ready to use their charge skill, the weapon type of the charge attack may also change. A list of cards whose charge skill activates in None type would be found here.

Resistance to None damage

Currently, no skill of an obtainable card exists that confers the card resistance to None attacks. None damage is a technical existence in the game that would normally never happen. If a None attack somehow occured, it would deal 0 damage due to its weapon penalty, so None damage resistance would be meaningless. Despite this, certain unobtainable units such as

Barricade do have such skills that None damage resistance. A list of these skills can be found here.

AR Equipment can only be equipped on cards that match its limitation criteria. None weapon type is one of the potential criteria. Below is a list of ARs where None is specified as a restriction or where no restriction is set.